Burning Greeks Alive: Manufactured Fires in a US Protectorate Part One

Hybrid Warfare in a US Protectorate 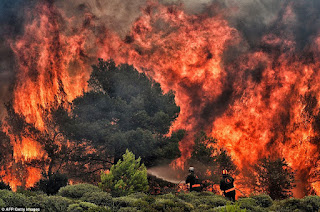 Greece due its geographical position is a crossroads between Europe and Asia and North Africa. It belongs firmly in the Euroatlantic alliance despite in the recent past having flirted with the East (during WW2 and the rise of partisan movements)

This isn't the first time Greeks have been burnt alive but it could possibly be the last. An extensive research article was published on Hellenic insider in the month of July (Who Burnt Greece?) http://hellenicinsider.com/who-burnt-greece-hybrid-wars-putin-the-south-stream-gas-pipeline-and-the-us/ These events aren't 'natural disasters' nor are they caused by 'climate change'. The focus of this article isn't to analyse the cause as its taken for granted these are part of state sponsored terrorism. The focus is to try to ascertain who did it and to what aim.

Its obviously too soon to tell but there are enough indications that this has been organised by sections of the US security services with ulterior motives which we will find out in due course (whether a Russian or Turkish angle is added!)

The question as to why nearly a decade after Greece was destabilised by the CIA over Russian gas pipelines such an event occurred of blatant mass murder in broad daylight? During WW2 we had the German airforce bombing districts and killing people like rats. The same occurred when Churchill arrived in Greece to 'liberate' us. Now the question is why?

The Minister of Interior has spoke about an 'asymmetric threat'. It has been reported that incendiary devices have been found and the Prosecutors office has started an investigation. For the first time the excuses of human mistakes have been downplayed in explaining how the fires started. The reason is of course simple, the main excuse since the 1980's when these 'natural disaster' fires started to appear in Greece was due to rapacious property developers who burnt areas down in order then to rebuild them. They turned previously green areas into ash in order to build either homes or holiday homes. An analogy would be car repair shops going round causing car crashes to have business. The theory stood as a stand alone thesis for a few decades primarily repeated ad nauseum by the Left that the purpose of mass fires was just a base capitalist motive of profit making. It could have been stopped in its tracks if the real perpetrators were called out. During the civil war led by the then 'communist' Left no fires occurred of any wooded areas despite the partisans hiding in the woods. Taking into account there were a lot more trees then and it was much easier to start fires and allow them to burn as there was no infrastructure to even attempt to stop them, none every really happened. But hey 'climate change' must have changed all that.

The fire allegedly started in the Penteli mountain region spread to Neo Voutsa and then Nea Makri where over 80 died being burnt alive and over 100 are still allegedly missing.

Who is the US Ambassador in Greece?

Geoffrey Pyatt is none other than Nulands boy who was transferred to Greece from the Ukraine. We all know his history in the Ukraine. Presiding over the shooting down of the Malaysian airliner and the burning down of trade union offices in Odessa with scores killed, his career has been to to organise death squads to weaken the resistance of East Ukraine to full blown Americanisation. Since arriving in Greece in less than a year we have had two full blown 'weather warfare' aka climate change events, one near the military airport of Athens and the other near the near defunct US base in Nea Makri. Mass murder ahs now become a 'natural phenomena' which just happens to occur on his watch. Lets now take a closer look at who he really is.

'As a native San Diegan who grew up in one of the worlds great Navy towns, I have a special respect for what the Navy represents and I am humbled by and thankful to all of you for your service. Captain Collins, thank you for inviting me to take part in this celebration" Ambassador Pyatt remarks at 242nd Birthday Ball for the US Navy.

Those familiar US military history know that after the SU collapsed and via the Yugoslav wars America embarked on a path to global unilateralism they sought new forms of warfare to hide their real intentions so they published a research paper entitled 'Weather as a Force Multiplier: Owning the Weather in 2025' http://csat.au.af.mil/2025/volume3/vol3ch15.pdf This was obviously in breach of the 1977 UN Treaty on Geoengineering between the old SU and America. But hey the SU collapsed and the Americans essentially abolished all treaties with respect to the sovereign rights of nations with what they embarked on with the break up of Yugoslavia, then with the invasion of Afghanistan and Iraq.

Having spent two formative years in Honduras Pyatt is well trained in the black arts of death squads and outright US gangsterism. After all Honduras was the original stomping ground of John Dimitri Negroponte the only constant in US governments abroad the man who presided over the central American death squads before moving across to Yugoslavia and Iraq. Negroponte alone embodies US imperialism abroad in its most rapacious form. Today they have published some books on this gangster who is a Greek descendant, so when anyone states why would the openly kill innocent Greek citizens the answer is in the history. That's what they do. Its just business.
"Our Man in Honduras

When a country finds itself at the center of world history, it begins attracting spies, mercenaries, war profiteers, journalists, prostitutes, and fortune-seekers. Often they gravitate to a particular hotel. In Honduras, which was shaken from its long slumber in the 1980s and turned into a violent staging ground for cross-border war, the Maya was that hotel. Perched atop a high hill near the central plaza in the capital city, Tegucigalpa, its tinted windows giving it an air of mystery, the Maya attracted a variety of sinister characters. Counterrevolutionaries hatched bloody plots over breakfast beside the pool. You could buy a machine gun at the bar. Busloads of crew-cut Americans would arrive from the airport at times when I knew there were no commercial flights landing, spend the night, and then ship out before dawn; they said they didn’t know where they were going, and I believed them. Friends told me that death squad torturers stopped in for steak before setting off on their night’s work. But in those days, much of what anyone said in Honduras was a lie. That was certainly true at the Maya, and equally so at the American embassy a couple of miles away.

The diplomat who presided over that embassy from 1981 to 1985, John Dimitri Negroponte, was a great fabulist. He saw, or professed to see, a Honduras almost Scandinavian in its tranquillity, a place where there were no murderous generals, no death squads, no political prisoners, no clandestine jails or cemeteries"
https://www.nybooks.com/articles/2001/09/20/our-man-in-honduras/
Stephen Kinzer
September 20, 2001 Issue

The US 6th Fleet which appears to be permanently in and around Greece (though stationed in Italy) since the 'migrant' crisis and the fallout with Turkey arrived in Piraeus on the 25th July coming from the Black Sea so passing by Rafina port. The vessel in question is the USS Mount Whitney which was also involved in Operation Enduring Freedom ie the invasion of Iraq and in the sanctions against Libya in 2011. It is according to its website:
"The ship's afloat communications capability is second to none.  USS Mount Whitney can receive, process and transmit large amounts of secure data from any point on earth through HF, UHF, VHF, SHF, and EHF communications paths.  This technology enables the Joint Intelligence Center and Joint Operations Center to gather and fuse critical information while on the move.  As the most sophisticated Command, Control, Communications, Computer, and Intelligence (C4I) ship ever commissioned, USS Mount Whitney incorporates various elements of the most advanced C4I equipment and gives the embarked Joint Task Force Commander the capability to effectively command widely dispersed air, ground and maritime units in an integrated fashion" and if one looks at the pictures appears to be a floating HAARP vessel.

The vessel left Bulgarian sea exercises in the Black Sea on 19th July to make its way to Piraeus which means passing across from rafina Port which is right next to the affected burnt out areas. http://www.c6f.navy.mil/news/us-6th-fleet-p-8a-participates-exercise-breeze-2018-black-sea

According to Lockheed Martin there are laser weapons that exist that can pulverise cars at least a mile away. Drones presumabely can be mounted with this technology and anything can happen. If one looks at the picture below tree fires burnt cars and turned cars into molten lava. Do steel works use wood as fuel to burn steel. . If they don't they need to get the technical know from Greece. They can cut their costs right down for their steel works. 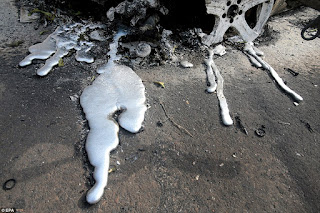