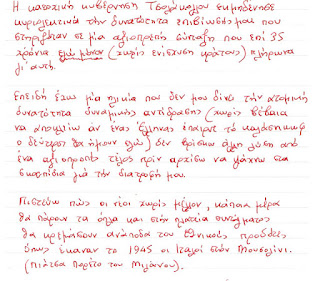 The occupation government of Tsolagoglou (reference to the Occupation govt of the ex-Defence Minister Tsolagoglou who became Quisling Prime Minister of the 3rd Reich) has erased essentially any possibility of my survival which was based on a decent pension which for 35 years, I alone (without the intervention of the state) had paid.

I am at an age which doesn’t give me the individual capacity for a dynamic intervention (without of course precluding that if one Greek took up arms-Kalashnikovs, the second person would be me) I cant find another solution from a decent end before I end up looking in the rubbish bins for food.

I believe that the young without a future, one day will take up arms and in Sindagma Sq will hang upside down the national traitors like the Italians did with Mussolini (Piazza Poreto Milan)

The event occurred 9am today...by the retired pharmacist.


Update-Riot Police Attack 10,000 people on a vigil in Sindagma Square due to the suicide of the Pensioner 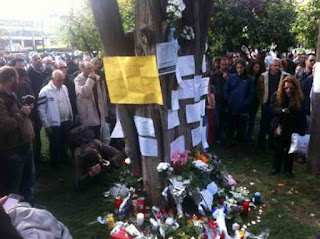 The fake Left refuses to leave Parliament and go on the streets in an organised manner. A total and utter disgrace. Shame on them.

Pictures and Info Below
http://www.newsit.gr/default.php?pname=Article&art_id=132116&catid=3