The so-called Zaev concessions, taking us for fools.
The famous concessions of Mr Zaev and others regarding the name is just drinking the Kool Aid. They are smartalecks which could only be directed to a nation of idiots and on their knees. For us it is a shame to still even be talking about this as the name of the airport and the highway is their own exclusive benefit to change it again immediately they achieve their aims. Truly does the Skopjian PM believe we are such idiots? Or so ready to drop our pants? I ask sorry for using this phrase. But it is the only one which can become understandable by all the foreigners and our own lot who believe that they have led us with all the economic measures to the last step of evil, that we have forgotten our history who we are our fundamental characteristics.

We will stand on our feet and not recognise them
Its not the first time that everyone around us believes that Greeks have been transformed into slaves but he is rising again. We are always a peacefule nation who wants peaceful and friendly coexistence with our neighbouring peoples. Parallely we must understand there is a deep state which conspires with other international forces against the independence of our country. For this reason we must not have illusions and take all the necessary measures which will guarantee the defence of our country. Here I must add that the situation of maintaining the status quo and peaceful coexistence should be considered the last concessions we do in confronting hard reality. But in essence we have nothing to lose.

Without Greece’s approval, Skopje will never become Macedonia.The fact that there are countries that recognise Skopje with the name Macedonia ignoring the fact that they become jokers with respect to history doesn’t really bother us as it is only our decision and our decision alone that can historically legalize and judge irrevocable this issue. As only us Greeks can give or not give the right to Skopje to own the future via the name Macedonia, an undisputed from any viewpoint, historical, cultural ownership of hellnism. To explain it more simply they require Greeces agreement so as to be thought of as real Macedonians and not fake ones, paper ones which they are today. As we are refusing to take our eyes out to be loved by America NATO and the EU, we can continue our lives as we did so many years. But that implies that we must refuse every other retreat. For whoever long the people of Skopje threaten us with their territorial propaganda claims, their unacceptable Constitution, the alleged Macedonian symbols and the Macedonies full of Alexander the Great, we as a responsible nation who are hereditary owners of a great history will continue the policy of peaceful coexistence but whatever we can do we will not give in any case our agreement for them to become members of the EU and NATO.

Only with a Referendum can we legalize any signature.
In this crucial moment infront of the possibility to be led even in situation of a national tragedy, I consider that responsibility of the decisions its not correct to give over whatever government. Not only a minority government as is todays but even a government that had popular backing. Not even Parliament itself. What is the solution? A Referendum. For us the position of the Greek people on the concrete issue is quite clear stable and self-explanatory which doesn’t require a Referendum. If a government ever considers placing a signature of our country to whatever name simple or double which will include the word Macedonia there is no doubt that it is obliged to ask the Greek people. We Greek citizens who do not seek to be passive observers at the time when our country is found confronting such crucial problems able to influence us for many decades. In this instance that the government dares to place a signature I make a call to all the MPs who have the right to call for a Referendum for such a national issue, to provoke the relative discussion in Parliament and to fully support this demand. 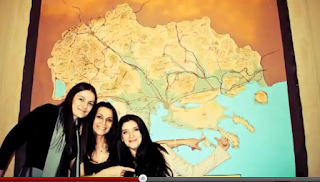 Epilogue
Dear Friends Patriots,
In all my life I fought for the unity of the Greek people. I believe fully that this great issue we should confront united with one fist. I also believe we are united. As independent from all our disagreements we are all patriots. As when someong supports the rights of a country and its people this isn’t nationalism but patriotism. Greece today has more need than any other period before it the need for patrtiots. Greeks united are giving their reply from Syndagma sq. Macedonia is won and will always be Greek. Long live the Greek people.