Macedonia will always Be Greek Theodorakis Rally Speech Part One

Macedonia will always Be Greek
Mikis Theodorakis 4th Feb 2018 Part One
My dear Greeks…brothers… fascists, Nazis, terrorists, anarchists, thugs. You have learned of course that the patriots that govern us alongside their sidekicks, the leftists were collecting signatures and yesterday threw paint on my house. So as to not allow me to speak here to the dominant peoples. So as to not speak to you with straight words, patriotic ones, fiery ones as I learnt all my life and as you taught me dominant Greek nation. To speak and act in all my life with every sacrifice and thankness for this. Anyway listen. This morning I received a poetic collection from Thessaloniki and one section asserts that spirit, the brain develops with Thales, Thycidydes, Protagoras, the tragic artists, the daring of Themistoklis and Kolokotronis. 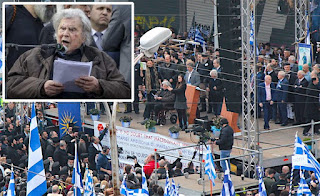 I dedicate my speech to Theodoros Kolokotronis.
Friends and followers I register my speech to the Greek who liberated us from the Ottoman dynasty and who died like today 4th February 1843, Theodoros Kolokotronis. I am not ashamed like the nation genociders who rule us, I will remain loyal to the holy values of our forefathers who taught us love and sacrifice for our country. A country which respects and loves all the countries on earth. Yes I am a patriot and an internationalist and at the same time I reject and fight fascism in all its forms and in particular in its most deceitful and dangerous form, its left orientation like the small grouplets of extremists who are just pure coward terrorists.

We are governed and were governed by minority governments
Like those who govern us and destroyed the country, hidden behind the electoral alchemies of politicians which are the by products of a system that is biting us and hurting us as it is dying and it knows is and that is why it is even more dangerous. In a difficult time for our country, where dark clouds are gathering around us, we are being called to confront them united as never before these new threats.

The Forgerers of Skopje
Skopje using the name Macedonia and transforming historical events to a point of being ridiculous, are attempting in reality to extend their borders against us for the creation of the so-called Aegean Macedonia. This aim functions for decades now as a basic national aim of the neighbouring country and a generation of Skopjes citizens have been brought up with the idea that they are the direct descendants and relatives of Phillip and Great Alexander.

With a colossal propaganda they achieved to lead astray in this historical ridiculousness a number of states aided by the stance of Greece and those responsible who didn’t make a simple attempt in the eyes of foreigners to criticise this monstrous falsification of history.

We must recognize that it is also our responsibility the fact that we allowed so many decades to pass of Skopjes citizens with the ideas I just referred to so that it appears futile or even unjust to ask from them to change their name which has become one with themselves. Having reached the sorry position where it affects us as a peoples and we are forced to apologize for our patriotism

Our conscience does not allow us to agree
We cannot agree with this falsification of history, as we then become co accomplices with the powers that openly aim against our territorial integrity. What can occur? We must recognize our mistakes and our responsibilities in front of the people’s dominance. The only solution is for us to allow the Skopje citizens to believe in their national myth and us parallel to remain loyal and irreconcilable to the Greekness of Macedonia. Never to agree that there exists another fake Macedonia. For if we do that its as if we want to take out our own eyes with our own hands.

1992
The council of political leaders in 1992 decided a national line in a name where in no way the word Macedonia would exist with geographic or other directions ie no upper or down and in no way with ‘new macedonia’ as it erases the historic Greek Macedonia and announced a successor with another peoples in the area.

Next aim the dissolution of Greece
If we give in from this line we will have disastrous results for the future of our country. If we retreat this time from our position for the name its as if we open up fully our borders to those who threaten us in such an open and vulgar way from their own constitution. We are obliged to be vigilant for the defence of our national inviolability, taking into account there are strong foreign forces which have the aim to balkanise even more the Balkans. The case of Yugoslavia is still fresh. The next victim will be our country. Dark clouds threaten us and every day that passes they become more evident. If we give in to the open provocation of Skopje without them having resigned from the main aim of their national and political line to become members of NATO and the EU without own vote so as to threaten us from an even stronger position we will then be worthy of our fate. If we retreat we open the doors wide open to impose once and for all a tragic historical lie with unknown consequences for our country
Posted by vngelis at 13:57