Its difficult to start to make an analysis for the positions of
Workers Power around the issue of racism, as the class perspective is
totally missing from their perspective. They are just trying to
theoretically justify (if we can call it a ‘theory' the eclectic and
contradictory combination of ideas where they try to make things black
and white) so as to propagate the policy of Open Borders which is
being followed by the imperialist EU, from a ‘progressive'
perspective. The labour movement is being obliged to adapt to the
policy of the EU and thus must sit at the desk of ‘Ergatiki Exousia'
so as to be taught manners and to be educated in an anti-racist
manner.

In their paper num 76. July-Aug edition they publish an article on
racism where without understanding what they read and write they use a
section from an Essay of the Greek TUC which states the following:

"The entrance of the new labour movement which covers now around one
third of the total number of labourers who are occupied in Greece".
(Greek TUC Report)
In other words 33% of the working people are immigrants. From this
they conclude that the borders of Greece are hermetically sealed.
Greece is a Fortress inside a European fortress! Someone could ask
them what percentage should the 33% of cheap labourers be so as to
theoretically accept the borders are open? 100% of all labourers,
200%, 500% an endless figure? Not that we expect a reply to this
question.
"Whoever continues to talk about open borders is either consciously
lying or doesn't have a consciousness of reality" they state in their
paper the volunteer anti-racists of Ergatiki Exousia
Just think about it. More than 2million (and more) immigrants who live
in Greece, a percentage which represents 20% of the total population
are a ‘conscious lie'! Whilst truth is that Europe closed its borders
a long time ago, stopped immigration, became a Fortress. The simple
Greek worker who believes in the opposite doesn't have a
"consciousness of reality"! As this reality isn't one which he
witnesses daily in his journeys on public transport, in factories, on
ships, on building sites and public works, but that which exists in
the pages of Ergatiki Exousia.
Do Foreign Workers Take any Jobs? 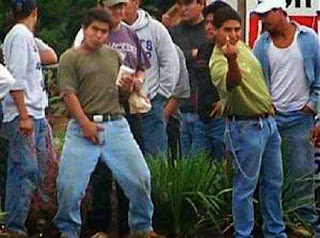 Nah!... No jobs are taken we are told by the openeyed volunteer
anti-racists. Greek capitalists didn't bring them to replace the more
expensive and demanding Greek workers but for them to do the jobs
which the well fed locals refuse to do! The foreign workers who'
"work in Greece occupy positions which are exclusively those of
unskilled labourers such as cleaning duties, cleaners etc for women,
or building work, agricultural work etc for men"…
The historical analysts of Ergatiki Drasi after an intensive analysis
of the history of professions in Greece found that in their
"overwhelming majority we are dealing with occupations which were
created after the arrival of immigrants in Greece expanding the labour
market"
As the ‘reality' for which we don't all have a ‘consciousness' is that
before the immigrants arrived in Greece there were no house servants,
no building workers, fishermen, no one dug any fields or worked in
making furniture!
Let us not say that the ridiculous logic of the ahistorical globalist,
who also wears the cover of the farleft anti-racist! Before 1990 the
Greek worker didn't work. He knitted and waited for the arrival of
immigrants to stand upright and become a labour aristocracy. Now he
has found a new occupation! A "manager of consumerism" avoiding every
labour intensive activity, just like the writers of Ergatiki Exousia
avoid every intellectual activity, with the end result of filling up
their paper with illogical lies.
The whole of the history of the Greek labour movement and for every
country is based primarily on one-two militant sections with a history
and tradition, with a socialist tradition and perspective for another
world. The dockworkers and building workers before they were
globalised were the advanced guard of class struggle. The example to
be copied by all the other sections. Whoever sits to read a little
history will see that the dockworkers and sailors were the first in
Greece during the 2nd world war who created Workers Committees which
decided and forced the shipowners onto their regime on the ships. They
reached such a level of class militancy and dynamism that the bosses
couldn't recruit or sack who they wanted when they wanted. Their fame
spread in all the significant shipping fleets around the world and the
dockers and sailors in many countries followed the example of the
Greek dockworkers.
Greece occupied 25% of the shipping fleet of the Western world and it
is no coincidence that the shipowners tried to break the power of the
dockworkers and ships crews. This was finally achieved by the rise of
PASOK in power and the policies of the Stalinists who wrote off the
leadership of the dockworkers and supported the party of ‘change' (how
PASOK called themselves). The ship owners created schools of sailors
in the Phillipines and slowly but surely started to replace Greek
crews with hungry and subdued politically and educationally backward
workers so as to escape from the high labour contracts, and the
special provisions regarding in particular unhygienic and dangerous
labour,  pre-determined hours of work and to introduce on the ships a
regime of the Roman galleys, once more.

The shipowners from their base in the City of London have in store a
future identical to the one above for the whole of the working class.
With the use of foreign crews they achieved what they hadn't in 4
decades. They gained from the paltry wages they paid and more
significantly they achieved a significant strategic defeat on the
whole labour movement in Greece opening the path for the subjugation
of all sectors, using as a lever mass immigration. This task will be
undertaken when every relationship with militant and revolutionary
traditions of the Greek labour movement are broken with the
replacement of the natural carriers of these traditions not by the 33%
of the Greek TUC report but by 100% with the support of the ‘leftists'
of Ergatiki Exousia ilk. Now I am thinking about it maybe they should
be called ‘shipowners power' as they attack all gains of the Greek
working class and they try to defamate as racist and to fanatisise
against it for the benefit of the immigrants and the hordes of
pettybourgeois who even today swear against the high salaries and
militant tradition of the Greek building worker. The building worker
which they so hated as he was militant and wasn't easily subdued and
they wanted to see him so.

Ergatiki Exousia doesn't ask to whom do the jobs belong. To Greek
workers or their bosses? If the Greek boss had 5 Greek workers on an X
wage and he sacks them recruiting 15 immigrants, he didn't create 10
new positions but divided 5 wages to 15 people. With such logic (if
anyone can call it that) they claim with all honesty that unemployment
in Greece has remained stable and during certain periods even been
reduced!... What a nice picture for Greek capitalism, which the
working people would appreciate if only they read Ergatiki Exousia!...
With 1/3 of the labour force being immigrants, with only 2,000 Greek
dockworkers left out of an estimated 100,000 in 1970, everything is
going fine. For whom isn't really the issue! We owe them a lot. Due to
the immigrants the wages on the building sites –as everywhere else in
the private sector – are now under the level of the 1980's decade.
Hours of work have gone through the sky. Thus the beggar became a
‘strong Greece'. It's a fact. Not only told by Simitis. Also agreed to
by Ergatiki Exousia. Greece from being at the bottom of the EU, due to
the expansion is now somewhere in the middle. First among last. Great
is its glory (but these borders keep on closing whilst the EU keeps
expanding. Goddam Fortress!)
The use of immigrants we are told by Erg. Exou. Hasn't occurred due to
the collapse of gross sales by companies but because the expansion of
the market. We needed immigrants in booming capitalism. You see
without them the Greek worker would be lazying about. He wouldn't get
of the couch to pick a grape (despite doing this for thousands of
years) or to clean a hospital. Saviour for the ruling mafia always
came from abroad. In the olden days with loans-neckbraces from the big
powers, now with immigrants.

Foreign workers do not take jobs from Greeks states Ergatiki Exousia
as the market has developed and unemployment remained the same. But if
the market truly developed would unemployment remain the same? The
unemployed remain unemployed in a period of growth of the economy? So
who takes all the new jobs (if they truly exist) as they aren't being
taken by Greeks? Even with their so-called economic analysis Ergatiki
Exousia cannot be consistent. It is full of contradictions.Whilst they
present a picture of economic boom of capitalism and the appearance of
new jobs unemployment remains static. In other words development
doesn't equal a drop in unemployment. Immigrants don't then take the
jobs of Greeks. Or are they taking the new jobs and therefore a drop
in unemployment is impossible, despite development?
Trying to justify the unjustifiable and to state that the presence of
immigrants has no social, political or economic consequences, but only
brings to the surface the racist nature of Greek people, the writers
of Ergatiki Exousia are being led by mathematical precision into the
camp of the apologists of capitalism, in its greates crisis of
history, who is attempting to survive transforming the planet into an
arsenal of racial conflicts and planetary slavery. The industrial
bourgeoisies in globalised capitalism will try to replace the hands it
uses with cheaper and cheaper pools of labour, using the endless pools
of illegal labour wherever it can on the planet. Not to improve the
standard of life of the hungry and disposed but to destroy whatever
was achieved by struggle by Western workers and to globalise
immiserisation.
Imperialism has already moved far along this path due to the good
services of our current socialbetrayers. Ergatiki Exousia appears to
be on this camp already. It wants (alongside the bosses) for the
building workers who remained unemployed and their wages were attacked
in the 1990s to not fight back exploiting the opportunites given by
the Olympic building programmes and all the other public works and to
remain on the sidelines as the ruling elite guarantees immigrant
labourers to the sub-contractors with ridiculous wages.