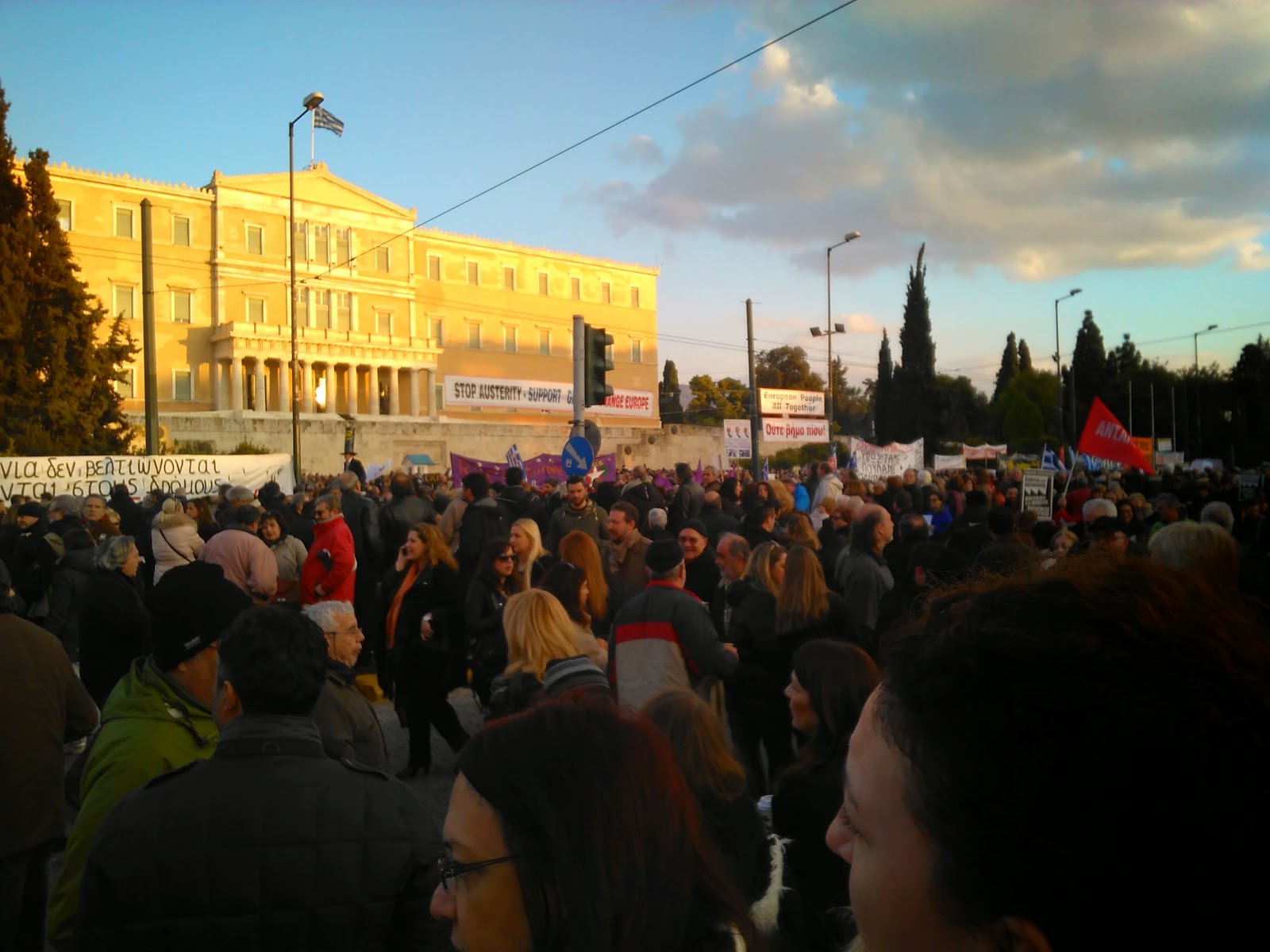 Sindagma Sq-Eyewitness Report-War of the Roses 15th February
Whilst probably less than last time despite it being on Sunday and with much milder weather the tone was sombre.
No one understands anymore why they are there. There is no longer a reason for demonstrations as Syriza is no longer debating the issue of the Debt, it's folded over on the issue. Most of the banners on demo were saying Not One Step Back and such were the titles of papers within Syriza - DEA, Marxist Tendency etc.
It's as if last Thursday never happened. Varoufakis was clear on Saturday's interview in the Guardian, there is no Plan B. Separation has occurred but the divorce hasn't been finalized. Each side is ripping the other side up, like in the film with M Douglas and K Turner in the War of the Roses. Syriza doesn't want to jump and the EU doesn't want to push. This can't go on indefinitely as it implies Greece will have a  pay as you go relationship to its debts and everyone else would follow suit. But when you don't have a Plan B and the cash flow dries up you will go the way of the previous four parties under the Troika, into the dustbin of history. If Syriza doesn't cut any deals with Russia like its predecessors, and remains committed to Euroatlanticism it will fracture far quicker than New Democracy. People don't have time to wait for solutions to their problems in the afterlife. Like some leaflets said Better the Drachma than Subjugation, We Don't Owe, We Don't Sell We Don't Pay.

5th February
The first protest organised via social media occurred on 5th February at 6pm. Thousands arrived possibly around 30k by the time people heard about it. The tone of the mood was that this was the first time since the Squares Movement in June 2011 that people felt free to protest in front of Parliament without a protective barrier or riot police ready to storm and tear gas people.

11th February
The 2nd gathering 11th February was possibly three times the size of Syrizas pre-election rally (around 80-190k) despite the extreme cold and the snow that started falling. People turned up on their own or within organisations. Whilst the mood was sombre many carried Greek flags and sang the national anthem the message was clear, don't back down don't come back with your tail between your legs. A third gathering is scheduled for the final Eurogroup meeting

If Syriza was to just fold and implement Samaras ND policy then there was no reason for the recent elections. The govt would start to fragment as there are already rumblings over Varoufakis statements regarding the % of support to the Troika programme which he placed at 70% in support. If Syriza has no Plan B and is ejected from the Eurogroup then the negotiations were futile.