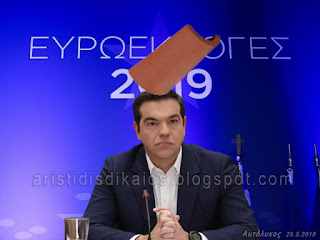 One can understand but not fully work out at first glance why a real 6% drop in electoral fortunes of Syriza led to a calling of snap elections? We aren’t in 2014 when Greece was rocked by mass strikes against the New Democracy government of Antonis Samaras. We have allegedly come out of the 3rd MoU and official unemployment has dropped by at least 10% since that period which had seen widespread cuts in wages and pensions.

The official line is that Syrizas suffered a catastrophic collapse in its Euroelection votes by maintaining the same number of seats as in 2014 that is 6 in total coming second as opposed to first losing 12% in overall votes and less than 3% in percentage terms. By implication coming second forced a snap election, to forestall further drops in Syrizas electoral fortunes or to hasten the rise of Mitsotakis into power by gambling on ND not being able to gain an absolute majority or anemic majority.

Now taking into account Syriza stated ceaselessly and tirelessly that they would call elections in autumn of 2019 calling snap elections on the night of the Euroelection results then this must have another agenda. For a start there is little actual difference between ND and Syriza other than their political roots. Syriza have proven to be Merkel’s best friend.

Privatising what ND hadn’t by 2014 in the ports, railways and regional airports, cutting pensions in areas not touched as yet by ND, going national with unemployment pay from the 2-3 regions inaugurated by Samara’s and the difference being increasing the minimum wage in March by 10% whilst offering a paltry rise to pensions after years of cuts, reducing official unemployment by around ten percentage points, removing Macedonias heritage by promoting NATO expansion and signing military pacts with Israel.

Syriza’s hard core vote losers were of course their globalist love affair with all things migrant which was reflected in the votes during the Euroelection on the islands where they set up migrant camps is Lesvos, Kos, Chios, Samos and their NATO expansion tendencies with respect to their neighbours FYROM in the name change.

Now despite the above no real momentum was gained by ND. Main reason being the current leader who is associated in popular conscience by the cuts of Samara’s ND in the hated period of 2012-2015 where the Troika ruled no questions asked in its most audacious period destroying the Greeks. If current voting patterns stand ND will have a 1-5 majority.

What changed was the destruction of the parties which are non-entities or only appeared on the scene after the catastrophic collapse of ND and PASOK in the 2012 elections them being: Potami, Enosi Kentroon, ANEL etc. which combined at their maximum gained about +15% of vote.

ANEL as the ‘patriotic rightists’ partners in crime of Syriza got wiped out due to their despicable stance over Macedonia. In their place instead of the new kids on the block gaining electoral momentum eg. LAE, Plefsi Eleftherias and MERA25, we had the emergence of Velopoulos party Ellinik Lisi ('Greek Solution') which mirrors itself on Trump. We also had a 50% collapse in the fortunes of GD who since 2012 when they gained national prominence have hid behind the leaders skirt and have essentially gone into parliamentary money and hiding. This now begs the question if they are no longer a visible viable force, who will play the role of the ‘new barbarians’? So far since 2000 we had LAOS, then GD and now… ‘Elliniki Lisi’ as the rightist populists so any subsequent rise in the electoral forces of them when/if no party has a strong overall majority to govern independently makes the smaller parties playmakers in the game of who controls what and in what geopolitical direction. 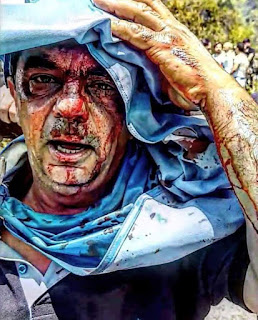 ND Globalist Clowns
New Democracy characterised themselves as loyal servants of the Troika when they governed with Venizelos PASOK in 2012 and instituted the harshest of cuts leading to what was by all accounts a mass uprising which went in the direction of being uncontrolled and spiralling Greece out of the EU/Euro. But knowing this the system prepared the ‘young radical leftist’ caricature of a militant whose sole purpose was to demobilise the mass movement in the direction of the EU by paying lipservice to the victims of the financial crash and changing the language surrounding a continuation of the previous austerity programmes. In this he was aided essentially by his own ‘left’ opposition (Lafazanis, Konstantopoulou, Lapavitsas) which remained in the party until the 3rd MoU was signed and the KKE’s despicable role in abstaining from all the important issues of the day such as the debates around the return of the Drachma and an Exit from the EU in particular with their abstention from the OXI referendum and their abstention from the Brexit one as well.

Mitsotakis will soon be premier and the accusation now is the Greek people have lost their senses by passing votes to him. The bottom line is who votes for him as the lines of demarcation are still there. The fake parties of the middle have disappeared and an overwhelming section of them have gone back to either ND or Syriza. Under this type of parliamentary system one who turns up to vote will vote presumabely with the devil to get rid of what is in power. If that is acquiescence and as the results of the Regional Governors and the big city Mayorships show Greece has gone blue again. ND is the traditional party of the ruling class and of business, business which has in the last three decades mostly migrated abroad and a ruling class which is essentially globalist based on City of London ship owners whose main form of business is the shipping of goods east to west and a political class which is closely associated with euroamerican atlanticism.

But this break within the USA, the advent of tariffs against China and Mexico, a renegotiation of NAFTA, a return to home based manufacturing etc. imply Greek politics is at an impasse. For Mitsotakis represents globalism just like Syriza does, being anti-tariff, full on mass replacement migration and for NATO expansion into the Balkans, for a ‘Greater’ Albania and for ever friendlier relationships with Turkey. Their last PM (Karamanlis) was best man at Erdogans daughters wedding in 2004, and what characterises ND is always foreign is best, domestic is rotten.

Syriza has no roots in actual society 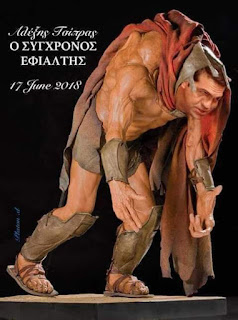 What characterised the rise of Syriza and what was never mentioned unlike the rise of PASOK in the 1970’s-1980’s or the rise of EAM-ELAS in the 1940’s was a direct link to mass roots in society. Syriza never had any and will never gain any. They had a shell of an organisation far less than the KKE, but they had ‘deep state’ backers. Their official house organ ‘Avgi’ so no actual paper rises. They created an array of new media in print and radio which defended them and their globalism. They adopted ‘stars’ who were promoted the world over in photoshoots (Tsipras, Varoufakis), they had foreign correspondents (UK based Paul Mason) who pimped for them. The bottom line was they were the safe bet, the safety valve, they who could stabilise a collapse to avoid it going to the extremes in a pantomime game where we had the interplay of secret services (killing of rapper Fyssas and two GD members), the unity of the ‘constitutional order’ as they came to call themselves against… ‘neo nazism’. The same people who in a different period eg the Steelworkers strike shared platforms with those same ‘neonazis’ to sell out the strikes. 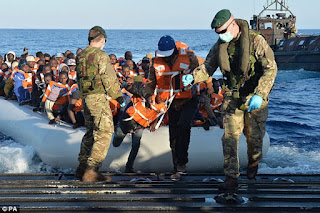 Syriza created a whole array of ‘new jobs’ those linked to mass replacement migration NGO’s, translators, drug and rape mules, accommodation etc. and pioneered new ones: taking over state owned buildings and using them to house whoever arrived and claimed to be a …refugee.

They expected with their paltry ‘benefits’ (200 euros a month to chronic unemployed) limited housing benefit just this electoral year, a small increase in pensions after a decade of cuts and the chronic haemorrhaging of youth abroad which continues unabated that this would maintain their vote indefinitely and that no amount of sell-outs (when they claim they originate from the left not the right) would have an effect on popular consciousness. The Greek people did not buy it and ensured they were defeated at the polls. They did not consider Syriza as Left and chose the other Right.

Going Forwards
The change in the electoral law which does away with the bonus of 50MP’s for the next but one election is where the parties are gambling in political representation and where it will focus in the creation of coalitions if ND does not win an absolute majority.

The power of inactivity that maintained Syriza in power is coming to an end. Parties aforementioned before grew and disappeared. The same power of inactivity has kept political zombies in power, those of PASOK, GD and the KKE and to a greater extent Syriza and ND. In the last elections around 1.4m people voted for parties that didn’t get 3%. This used to be around 4-500k. Adding abstentions this can be translated as a big Fuxx You to parties in general.

Not only is the electorate at an impasse but the whole rotten edifice of political parties that participate in the elections. One by one the reserve armies are expiring, ND may appear to be the big victor but the movement towards it is provisional, just until Syriza goes. Like the movement towards Syriza to get rid of Samaras and Venizelos.

ND’s big problem is the actual existence of Syriza. Will it survive intact after the slap it received in the Euroelections and the Mayoral ones after the 7th July? Will Syriza continue to survive without actually having any real roots in Greek society and will Tsipras continue to be leader after 7th July

Various establishment clowns dream that PASOK may be able to regain any losses incurred by Syriza and gain its rightful crown as the 2nd biggest party. A big dream but it will never be.

The dilemma facing the parliamentary system in Greece is that it is exhausted. It’s only real agenda after economic genocide is replacing Greeks. Almost all indigenous industries have either closed down or been exported, faith in political parties finding a solution to anything is at an all time low and when struggles emerge as the new clown in charge of ND is on par with many of the previous ones things will only go from bad to worse but the difference being, Syriza wont exist anymore as the anti-MoU saviours of the Greek nation. They bought time for capitalism in an era when it’s on life support. As was noted when Syriza came to power Greek history does not end with their arrival on the scene. Now it is re-starting again. The damage done by Syriza in terms of Left politics in immeasurable far exceeding the collapse of the Soviet Union when the KKE entered a coalition with ND. From the hope generated by the hundreds of thousands on the streets, the mass strikes the conflicts with the riot police, a whole generation was betrayed by political slime balls, individuals so rotten that they made the idea of being Greek shameful, for when Greeks were on the streets even when the whole worlds media was against them for allegedly being responsible for the causes of the financial crash on European soil, people could ride it over. Collective action gave way to individual solutions as epitomised by Syriza in government. Defeat on a psychological, economic and interpersonal level became the norm. People sought individual solutions for collective problems. Until that process is reversed and national solutions are sought to political and economic problems the fate of the Greek nation resides with the Greeks themselves. No one will do it for them.

Greece will either belong to the Greeks or it will cease to exist.