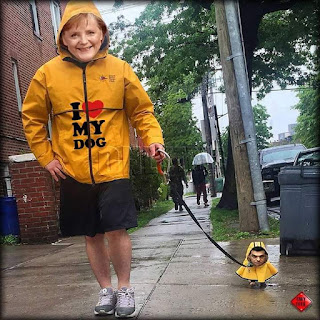 The close connection of associated and assorted disparate leftists with each other and the top echelons of the British trade union bureaucracy is well known and runs deep and has done for decades and does not really require documenting. A small group of people were present in Greece during 2012 from the UK (including the author of this piece) responding to a call made by the Spitha movement of Theodorakis about creating a solidarity movement with Greece. The origins of the British involvement were the Unite trade union, the Stop the War campaign, ex-Union chiefs like Paul Mackney and Labourite councillors alongside journalists like Paul Mason. The original aim was to publicise the Greeks fight against austerity, provide medical aid to much needed Greek hospitals ravaged by the IMF and to group together activists in the UK and Greece to publicise the situation of austerity. 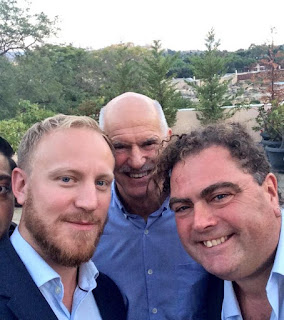 This same group of people became uncritical bedfellows of the neoliberal Syriza roadshow and have now fully degenerated into open supporters of the mass labour displacement of the Greek population by the mass importation of alleged refugees and the creation of ‘migrant hotspots’ all over Greece. They are now doing what their forebearers in the trade union movement did many decades ago, allying themselves openly with imperialist policies, no questions asked. Illuminating is the fact that they have fellow traveller trade unionist leaders who do all in their power to scab on their members back home, but who go to Greece to show ‘solidarity’ with people like Papandreou (who instigated the IMF genocide programme) like the leader of TSSA Manuel Cortes. Corbyn also arrived in Athens to take his photo op with Tsipras at the area which had protests for refuse dumping in Keratea. It has to be noted that Syriza refused to go there and only turned up when PASOK lost a battle by the concerned citizens who refused to agree to their area becoming a dumping site. 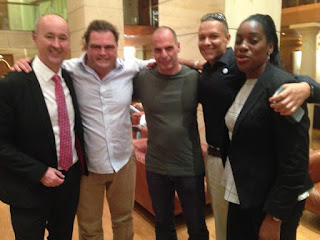 In the summer of 2015 when Syriza was already in power hey spent time justifying Syrizas neoliberal agenda by alleging ‘This is a Coup’ as Tsipras was in a 17hour negotiating meeting with the Eurogroup, (he looked fresh faced when they interviewed him in the morning mind you!) they then spent time promoting pro-EU Varoufakis roadshow and now their only concern is how many migrants should arrive in Greece, be fed and housed whilst ignoring the plight of Syriza’s austerity on people: pension cuts, farmers strikes and blockades, migrants looting and disrupting peoples lives in the Aegean islands.

It’s no coincidence that the British TUC which has never once written a retraction in its despicable role during WW2 when it openly collaborated with Nazi Greek collaborators now has statements in support of… ‘solidarity with Greece’. What they mean by solidarity is solidarity with the banksters, the Euro, the EU, the London based hedge funds etc. That is all the British TUC, the Labour Party and its associated bedfellows in Greek solidarity are concerned about.

British Parliament
One of the first meetings organised in the British Parliament regarding Greek austerity was attended by one Syriza MP Samos Samoilides and a Syriza trade union rep George Harissis. They were rounded upon by Dianne Abbot and despite not being in government were asked how migrants were being treated by the government. Not how can a small country cope with an endless number of arrivals. Nor any questions regarding hospital closures as Dianne Abbots official position at the time was Shadow Health spokesperson. Syriza MP did say we are a small country and it’s very difficult to cope with all influxes but we want and seek a humane treatment for all new arrivals (by implication inhumane for Greek citizens!)

In another meeting once Syriza was in power it became clear their official position would be one of defending promoting and extending austerity in areas which had not been reached before. This meeting was organised by a Labour MP John Cruddas with the new finance ministry (current) member Euclid Tsakalotos (it is ironic his uncle was in charge of the British-American financed Greek civil war General Tsakalotos) and it isn’t lost on people that having handed over unpaid mortgage funds (by the millions of unemployed) to foreign funds Tsakalotos is attempting to evict tens of thousands of Greeks from their properties and create a homeless army, whilst at the same time using state funds to house and feed thousands of surplus labourers to displace Greeks fully and irreversibly for the current demands of globalism.

The globalism of the British labour movements organised sections is so deeply entrenched and so anti-Greek that they participated in a well organised global charade of labelling the retro fascist pro-EU, pro-Euro Golden Dawn clowns as the new Hitlers of Greece, precisely to prepare the groundwork to stop all resistance to the illegal occupation of Greece, by German imperialism, NATO and Soros sponsored NGO’s. But as with all these pseudo globalist attempts they always never take into account the wishes and desires of the local populations.
Despite allegedly setting up Greek solidarity on the words of Theodorakis and Glezos, both of them have been sidelined and never heard of since and in particular Glezos statements on migrants presence in Greece which despite being translated into English would never be re-circulated only because it doesn’t fit in with the globalism of the (anti) Greek ‘Solidarity’ Committee.

But then again why would it. Glezos had a real life fighting fascism not promoting it, having been imprisoned for it not basking in some bureaucrats wage or pension. Recently during the second election for Corbyn at the subsequent Labour Party conference Greek ‘solidarity’ invited a London based Syriza spokesperson Marina Prentoulis to waffle about the ‘debt’ and you guessed it…. Fighting austerity! By implementing the 3rd MoU or how the recent privatisations of Ports, Regional airports, Trains, Electricity and Water company are progressing. Syriza like the Heineken advert states reaches the (privatised) parts other (parties eg ND or PASOK) can’t. A few days later from this ‘dynamic’ meeting, Greek pensioners were teargassed for marching… 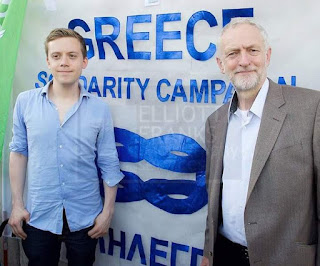 The most right wing Labourite MPs like Clive (I love NATO) Lewis and Tottenham Harvard boy the MP David (I love the EU) Lammy have tried to be associated with… Greek solidarity. One flew to Athens and had his photo taken infront of migrants in Piraeus port looking sad they weren’t all housed and fed by the Greek taxpayer whilst the other hanged around Soros boy Varoufakis and Papandreou. Why wouldn’t you. It raises your fake anti-austerity profile and your globalist pseudo-humanitarianism

All together now…they all met in 2015 after Papandreou had brought in the IMF in 2010 and inaugurated the economic genocide programme on Greeks leading to 30k suicides and 2m unemployed and 600k emigres.

True to form British ‘trade union solidarity’ has a (dis)honourable tradition, of supporting quislings of both the 3rd and 4th Reich. As such it should come with a warning like the one on cigarette packets ‘Danger to Health’ avoid at all costs as before you know it they may have displaced and replaced you and sold you off to the highest bidder.
José de Sousa Saramago, the Portuguese writer and recipient of the 1998 Nobel Prize in Literature. Though written about twenty years ago it remains universally up to date:

“Privatize everything, privatize the sea and the sky, privatize justice and the law, privatize the passing cloud, privatize the dream, especially if it’s during the day and open eyed. And finally, for the embellishment of so many privatizations, privatize the State, surrender once and for all their exploitation to private companies through international share offerings. There lies the salvation of the world… and, while you’re at it, privatize your whore mothers.”
Cadernos de Lanzarote (1994) 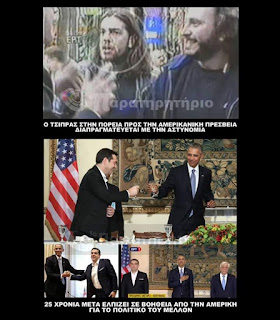