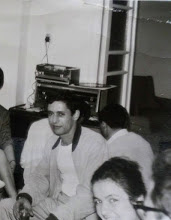 Born into a working class family in a South Athenian suburb of Dafni during the cauldron of WW2 in July 1940 when Athens was under a starvation blockade alongside his sister. Dimitris father was taken away by the German occupation and sent to work in a concentration camp. After the war he managed to walk back and make it home intact only to suffer the continued conflict of the Greek civil war. The dead bodies, the starvation blockades, his fathers disappearance and later arrival made an impact on the young Dimitri.

At a young age he got involved in politics after learning a trade (mechanic, lathe operator making olive oil pressing machines in last decades of his life) during which time he was associated with Michel Pablo. A voracious reader in his spare time, he met many of the engineers Pablo had sent to fight in the Algerian War of Independence and was quickly politicised in particular in the mid 1960’s when the struggle for civil rights became a dominant theme for the Left. In the July events of 1965 Dimitri was always present having now joined a new group Ergatiki Protoporia which was led by Lukas Karliaftis. Lukas had building workers associated with him and Demetri was from the mechanics union. The 1960’s were a period where workers took on the bosses and won despite having lost the civil war. Main reason was the Left wasn’t allowed or able to emigrate as they couldn’t obtain passports. I remember being told that Dimitri liked to see what was outside and once boarded a train from Athens ending up in Switzerland, had some hassle trying to get back but that was a learning curve when he escaped from the Junta.

As Editor of their journal he was solely responsible and would thus face imprisonnent when the Colonels took over in 1967. Breaking with Greek tradition he didn’t wait to get caught and be inactive in a police cell and made a run for it escaping to Britain. Via Lukas he had got into contact with Healy and the International Committee of the 4th International and when in the UK claimed asylum and ended up working there as an engineer in exile till 1974 when the Junta fell and he made the journey back home.

Between 1967-74 Dimitri published a Greek paper in exile ‘Ora tis Allagis’ Time of Change and was involved in doing lots or research on the Greek Civil War refuting the general thesis of ‘plague on both your houses’ by the Lukas faction and gaining a following via Healy. But Healy wasn’t what he claimed to be and in order to ensure the survival of his highly inflated organisation sold his soul to the Devil, removing the working class elements inside his organisation (Thornett faction of car workers at Cowley now BMW) and co-opting celebrities from the acting world (Redgrave) and adopting the nascent Arab bourgeoisie to keep the daily paper afloat by christening people like Arafat as leaders of the Proletarian Revolution in the Middle East.

A big dispute with Healys organisation was over the nature of the Greek Junta and how long it would stay in power. After the Polytechnic events in November 1973, Dimitri correctly predicted the fall of the Junta within a year and made preparations to that effect. They purchased the first printing press of the Left and managed to set it up in Athens before even the KKE. Healy wasn’t obviously happy that local organisations were acting independently from his orders. So in usual Healy fashion he organised an internal coup and removed Dimitri from the post of General Secretary.

Dimitri worked as an engineer in and around Finsbury Park in North London those days in the late 1960’s and always had fond words of respect for British workers in particular their respect for organisation and timed breaks. At the time jobs were plentiful and enough was made to be able to survive. Healy at the time had a lot of workers and this milieu was something Dimitri felt at home in, but his heart was always set on Greece. Healys gruelling regime of early morning paper sales burnt many a comrade, but Dimitri had boundless energy even managing to having a son whilst in exile.

Such was the widespread belief at the time that the fall of the Junta would bring about change that Dimitris paper then called ‘Socialist Change’ we had the word ‘Change’ ‘Allagi’ as the main slogan of the up and coming PASOK movement whose leader Papandreou outflanked the KKE. Such was the respect for Dimitri that Papandreou himself personally sent the current clown George Papandreou (who brought the IMF into Greece) to learn some basic politics. They allowed him to follow lectures and he wanted to take part in putting up posters but was so useless he couldn’t carry a bucket and the posters with the glue and would be all over the place and he didn’t last long. A total abysmal failure continued on into the present day.

Throughout the 1970’s and 1980’s in whatever strikes Dimitri was involved in supporting (Eskimo, OTE etc.) he only ever knew victories despite the pessimism of the KKE and all its attempt at derailing struggles. Indeed one must note that the KKE originally stated the occupation of the Polytechnic was an inside job run by police agents. When the mass movement developed after that and the global powers provoked the loss of Cyprus, Dimitri argued workers have go to war if called for, but stated the ruling class wouldn’t want an armed population in conditions when the movement was on the up. When the first American diplomat was killed by a newly formed ‘terrorist’ organisation as a means of curtailing the Left, Dimitri was arraigned by the police and answered accordingly when asked does he have any knowledge regarding 17th November. He answered Yes. Look at the secret services. They duly released him.

Greece enters the EEC in the early 1980’s and Dimitri followed the tradition of the old pre Junta Left which was vociferously against joining, criticising the fake left for taking part in Euroelections whose sole purpose was the erasure of national sovereignty. After the split with Savvas Matsas in the mid-1970’s they orientated towards KKE (interior) interior the precursor to Syriza, as they had dropped hard lie stalinism and allowed some form of discussion but under conditions when the revolutionary ebb from the fall of the Junta was setting in, it was just a continuation of the old politics with the facade of democracy. Almost three decades later when politics even for the far left had become the search for a money tree, nearly all groups joined Syriza setting the scene for its rise to power and it eventual sell out of the aspirations of the Greek people.

Having been in contact still with Alan Thornetts breakaway group in the UK -WSL and having gone to a couple of conferences abroad the degeneration of the British far left to personal identity politics was proceeding apace (a feature seen in Athens some three decades later) when they adopted transvestites in pubs they hanged out in and philosophised about the global gay revolution.

At every difficult juncture Dimitri returned to the classics of marxism to see if they held any positions on the topics in disupte and loe and behold he found texts and comments written by both Marx , Engels Trotksy which once reprinted were considered anathema by his political adversaries and granted an early ‘phobic’ label for raising one iota of criticism. These phobic labels were to follow him to the rest of his life.

Being in touch also with Wohlforth, the other Healy protege in the USA he helped translate and published Wohlforths seminal work ‘The Structural Assimilation of Cuba’ burying another tenet of Healyism which maintained that no social overturns could occur on the back of the old ex-USSR.