The Capitalist Crisis and the Election of a Syriza Govt 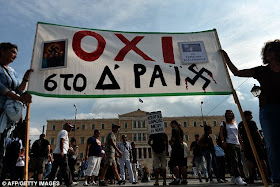 US president Lyndon Johnson’s hubristic disregard for Greek democracy when he expressed himself with regard to the Greek ambassador’s concern with the US’s preferred solution on Cyprus: “Then listen to me, Mr Ambassador, fuck your parliament and your constitution. America is an elephant. Cyprus is a flea. If these two fleas continue itching the elephant, they may just get whacked by the elephant’s trunk, whacked good … We pay a lot of good American dollars to the Greeks, Mr Ambassador. If your prime minister gives me talk about democracy, parliament and constitutions, he, his parliament and his constitution may not last very long.”

The fact of the matter is that Samaras-ND and Venizelos-PASOK spent the whole of 2014 pretending Grecovery had set in place but no one saw it on the ground. They then went around in the last 3 months stating the Troika is over in Greece and had discussions with Merkel who told them to introduce more cuts until essentially Greece has Chinese wages and zero pensions. Unlike the Latin American caudillos or even those of the ex-satellite states of Russia when the going got tough Samaras and Venizelos chose to cut their leadership short by bringing forward the election of the President by two months instead of bringing about new cuts and creating massive civil unrest and being forced to evacuate by helicopter to ...Miami.


This capitalist crisis is unlike all the other that went before it. What is becoming clear is that it is unrelenting it continues unabated and specifically in Greece it has taken the features of an avalanche. So far 4 political parties have been burnt ND, PASOK, LAOS, Dimar and lets not forget that from 1974 to 2010 the two main parties gained above 85% of the popular vote. In 2012 it had dropped by 50%. This time round it will have easily dropped by another 50% with 3 of the above four political parties disappearing off the political map.

Others who voted for GD and Ind Greeks will also feel that the present govt opens new possibilities for them.... The main losers will be ND PASOK and the KKE from any new election.


Just as Syriza didn’t want to govern in 2012 as after all it had no actual programme other than ‘end austerity’ and remain within the Eurozone, now we have those on the ‘left’ of Syriza standing independently to weaken its votes so it doesn’t get an overall majority. In 2012 the KKE received 4.5% of the vote. It will be a miracly if theya re able to increase it as almost all its political venom is about not voting for Syriza (what Junquer and Schauble have stated already). When in 2012 Tsipras offered a joint slate with the KKE, the KKE responded primarily with such ridiculous arguments that could be summarised in stating they only like to govern with New Democracy or PASOK (which is what they did in 1989). As a result they lost half their votes lost another third when it came to the Euroelections of 2014.


Antarsya whose politics differ not one iota from Syriza but due to the fact that its largest component the SWP-Greece had already split and one of its leaders had gone into Syriza (Davanelos) didn’t want to follow the same path as its leaders don’t need a career in politics (they have family money as they are related to the ex-central bankster of Greece- Garganas) so they play at politics not with what is required but with what they choose to do. The other coalition partners in Antarsya wanted talks and they are underway with Plan B- Alavanos (ex Sinaspismos chief), Drachma-Katsanevas (ex-PASOK) and EPAM-Kazakis (ex-KKE and Theodorakis) with the aim of a joint slate. In the last elections if their votes had gone over to Syriza it could have matched New Democracy. Now by standing they will be reducing Syrizas electoral prospects if they don’t get 3% thereby wasting the vote.


During the course of the next month the extent and the style of the Syriza campaign will determine whether they will gain an outright majority. So far they are trying to cook an omelette without breaking any eggs. A difficult task to perform as they are trying to ascertain what the other side are going to do. Germany can refuse everything play hardball and stop all funding to Greece. That will force them out of the Eurozone and in bankruptcy immediately triggering social unrest and revolt. This cannot be a German desire as the whole of the EU project will start to unravel. The Germans cannot expect for Syriza to continue where Samaras left off ie a new round of cuts in wages and pensions


On the other hand does capitalism have anything more to give or is it in a downward spiral where all the gains will now revert to the 19th century? Under these conditions a Syriza victory will only be transitional before something else is born. Just like in the place of PASOK emerged Syriza so with a Syriza victory people will feel they can gain something and demands will emerge in particular around the 30% unemployed and the previous attacks on pensions.


Syriza is a middle class party. It is soft at the edges. It has no real social base in Greek society. It believes that with nice words and correct arguments you can take on the banksters. It will give renewed hope to Greeks to fight and regain a life destroyed by collapsing capitalism. As such it will find it extremely difficult to govern as it can’t send out riot police to break up protests like in the Gold mine area of Skouries. If Merkel and Brussels give no leeway they will end up with more militant Greeks and Syriza will be a transitional govt to something far worse for the point of view of the banksters.


The political and economic impasse will be resolved one way or another.

Why was Greece selected?


This is due to the fact that its political class were collaborators with the German 3rd Reich and then went wholly over to Anglo-American imperialism leading Greece into a civil war and a bloodbath which saw a 21% collapse in GDP. Despite only being 2% of the total Eurozone economy Greece was allegedly the sum of all evil the root of all corruption the devil incarnate of what goes wrong when you employ people in the public sector or you have politicians. A nice convenient fairy tale to move the global narrative away from Wall St and the City of London. The corporate media who are an appendage of global capitalism sold the story and it was repeated ad nauseum by Greek and foreign politicians as if working in tandem. If the following course of events is for Greece to be burnt fully and spat out as the example not to follow it is good to heed Aristotles words ‘necessity is the mother of invention’. Being forced out of the EZ will enable Greece to print its own money, try to restore some of its control over its economy and leave the EU.

It can then start to trade with Russia and China not the financial parasites who only seek a pound of flesh. What may seem now like a pipedream soon will not. With a resolute leadership that is willing to go into battle the banksters can be defeated. They don’t produce much apart from debt and enslavement. The nations of this earth can go back to controlling their destiny not their destiny being decided without them and for them in other corners of the earth forcing them to accept millions of products as well as humans in the free movement of everything which has been called globalization. Economic genocide and the erasure of small nations is what was inaugurated by the 4th Reich in Greece. This time we have a good chance of defeating it like we did with the 3rd. We just need to be willing and creative.

Syriza: Will probably get over 35%. The US Ambassador predicted around 44% in a poll they had for themselves according to a mate. Hardly any people are found that wont be voting for Syriza. ND will be forced to get a new leader, many will go over to the Ind Greeks and it will change its name. If Syriza gets an overall majority it will be difficult for Merkel to not seek a compromise. If they boot Greece out of the EZ then the whole EU will unravel in 2015. Greeks can be bought lock stock and barrel and added onto German GDP and funded like the Germans fund their unemployed. If one doesn't vote for Syriza then that implies that you want Samaras to stay in power... The Germans may use an accounting trick to pay the German war reparations to decrease Greece external debt burden thus calling it a one off debt reschedule. The same will not be able to be applied for Italy and Spain. So either Germany adopts Greece or it goes for an abortion. That will unravel the EU faster. The choice is now theirs...

Syriza has stated that if Merkel does not back down they will call a Referendum. Some people are circulating the FALSE idea that Syriza will continue where Samaras left off. That might be the case with the leadership of Syriza. But if Syriza wanted to continue the same politics they could have voted for President allowed Samaras to run his course and taken a hit with the new round of cuts proposed by the Troika. The fact of the matter is that over 50% of Greeks haven't paid the property tax implemented by the IMF and the so called budget surplus during Grecovery was made up bullshit. That is what is at stake. Thatcher lost the poll tax due to non payment and after a riot almost brought central London into flames. Her successor didn't reintroduce the Poll Tax in the same exact form.

Germany’s leadership believe we are in 2012. We are not. The fear of Grexit and the rise of Syriza have existed for 3 years. Same threats do not apply to electorate. Rightwing in Greece grew up in cold war era with tales of the “communists will take your houses (wives, daughters etc.)”. Now they complain Samaras is doing it in practice. New Democracy will be unable to hold onto its electoral base and will not find a new one however many votes PASOK or Potami get.

With that in mind empty threats have no meaning. The exit of Greece may not indeed be of a systemic nature to French or German banks but will become a green light that the EU project is unravelling. This is understood clearly by Syriza. So if Germany doesn’t bargain they announced a referendum on the debt. Turkeys will never vote for Xmas. Fuchs can go Fuchs himself…

3rd January 2015
Papandreous sets up new mickey mouse organisation called Democratic Socialists.
Will take votes from PASOK and as PASOK is hovering around 3-5% hopefully will do something positive in his life and erase both their chances consigning themselves to the dustbin of history where they belong.

4th January 2015
Syriza held a show of force a controlled Conference in a big auditorium for media consumption. Tsipras tried to do a Blair and control the delegates and who would be assigned to which area as MP's creating a furore at Congress as local organisations did not want candidates jet setted in in particular if they had a murky political past. The Tsipras leadership was defeated in this endeavour. The margin between Samaras and Tsipras keeps on expanding on the corporate controlled media and the figures they provide are of course nonsense. Syriza should easily be in late 30's as a % and Samaras should be below 20%. One needs to remember that in 2012 in the first election the corporate 'public opinion' forming polls gave Syriza 9% and they got double that at 18% and Samaras took previous Presidents vote and almost halved it.
vngelis at 13:19
Share